Research shows why city dwellers want a life in the country

New research by the Regional Australia Institute (RAI) shows one-in-five city residents are looking to move to the regions, with more than half wanting to make the jump within the next 12 months.

RAI CEO Liz Ritchie said metro movers are looking for more space, to be better connected to the natural environment and they want a more relaxed lifestyle – all the things that Regional Australia has to offer.

“What’s really interesting about the survey we had commissioned is that the appeal of Regional Australia is a stronger motivation to move than any dissatisfaction with city life,” Liz Ritchie said.

“Brisbane respondents came in as the most stressed in the country, followed by Sydney-siders and then those in Melbourne. More than 69 percent of all those surveyed said reducing general stress and anxiety is a major driver for considering a life outside our capital cities,” Ms Ritchie said.

When asked about the reasons for considering a move, 70 percent rated traffic congestion as a major factor and 68 percent want to reduce their cost of living.

But it’s the positives of life outside the city limits which resonate even more, with 77 percent of potential movers ticking both space and connection to nature as reasons to shift. The improved general well-being that regional life offers is a major drawcard for three-quarters of those surveyed.

While the COVID pandemic has significantly raised the desire to move to Regional Australia for 22 percent of survey respondents, more than half said they were already considering relocation before the pandemic.

The RAI commissioned qualitative and quantitative research among more than 1,000 people in Sydney, Brisbane, Melbourne and Perth who were considering moving to Regional Australia. The research was carried out in November and December 2020.

Larger coastal centres were the most popular locations for potential metro movers, but when it came to smaller areas, inland towns held their own against those on the coast, with about one third of respondents indicating an interest in both.

“Concern about limited job opportunities was identified by respondents as the biggest barrier to moving to Regional Australia, even though the latest job vacancy figures show there are more than 54,000 roles available in Regional Australia, with professional and skilled jobs featuring strongly across the regions,” Liz Ritchie said.

“Our research underpins a multi-million-dollar, multi-platform national awareness campaign that the RAI will launch next month at its National Summit in Canberra. It will inform potential movers about the great opportunities to live, work and invest in Regional Australia,” Liz Ritchie said.

“We are very excited to be unveiling this campaign at our Summit and look forward to seeing many regional stakeholders there on 17-18 March,” Liz Ritchie said.

For more information about the Summit, go to regionsrising.regionalaustralia.org.au/summit-2021 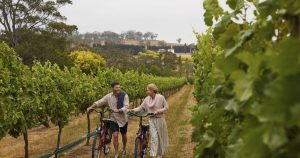 Business Southern Highlands is here to help empower your business to be successful in the local area.